Visual Arts has played an active role in St. Albert from the City’s inception in 1861. By 1960, the community was thriving and classes in basketry, creative stitchery and oil painting started taking place.

In 1962, the St. Albert Arts and Crafts Guild was formed. The basement of the local Community Hall housed the first Pottery studio, where several classes were available to both adults and children. By 1968, the growing arts community in St. Albert approached Town Council and were given two portable buildings that were placed in Salisbury Park, next to Vital Grandin School. The Arts and Crafts Guild offered classes to school groups, beginning the School Tour Program, which now exists through The Art Gallery of St Albert.

In 1974, a civic Master Plan was developed, which determined that a combined civic and cultural centre would best meet the needs of the growing community of St. Albert. In 1975, the St. Albert Further Education Council was formed, resulting in the transfer of classes traditionally offered by the St. Albert Arts and Crafts Guild to the City of St. Albert. Guild members remained active as resource people, technical advisors and instructors of the programs. 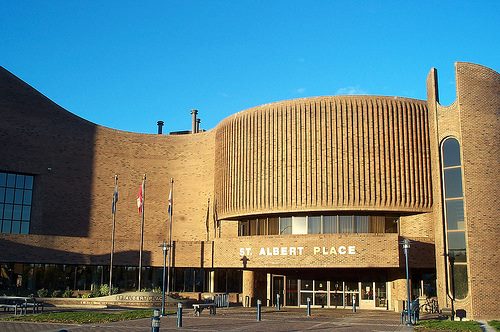 St. Albert Place opened in 1983 and was developed as a ‘People Place.’ The unique design of the building, created by Douglas Cardinal, included a library, St. Albert’s first civic museum, the Arden Theatre, Council Chambers, civic offices,  and state-of-the-art visual arts studios. At this time, the visual arts studios were named after Sybil Laubental, one of the area’s first professional potters and teacher to many St. Albert potters. Many of these individuals still practice their trade in the renamed St. Albert Place Visual Arts Wing.

The City of St. Albert is the first municipality in western Canada to create a Cultural Services Department, a department that works with the community to promote, develop and foster cultural activities within St. Albert.

Together, along with the Art Gallery of St Albert and the City of St. Albert Cultural Services Department, these groups form a non-profit charitable organization called the St. Albert Place Visual Arts Council (SAPVAC).